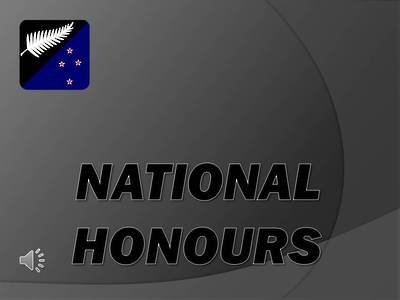 During our Festival Awards Evening (report below) there was acknowledgment and celebration of those students who during this year have excelled in their chosen sporting or musical activity to the extent of being honoured with selection at national level.

Enjoy the images shown above!

Prizegiving season started with a most enjoyable Festival Awards Evening at the Crowne Plaza on Tuesday evening (October 23). This annual event acknowledges the extra-curricular life of Lynfield College, the contributions of students, staff and parents, and the impressive leadership and achievements of individuals, groups and teams.

Former student and now professional golfer Marcus Wheelhouse returned for a second time as our Guest Speaker, and to present the most prestigious awards.

Full lists of students who received awards will be published in our Yearbook; the highest awards are featured here with brief descriptions of the achievements of the highly-deserving recipients.

2012 TEAM OF THE YEAR
This year this is a joint award to be shared between Premier Boys Basketball and Premier1 Netball.


Premier Basketball - Awarded in recognition of this team’s outstanding success in the Greater Auckland Basketball Championship where they finished 3rd out of 24 teams, qualifying them to compete in the NZ Secondary Schools Basketball competition.  This is a great achievement for our boys who have just completed their first season in the premier grade.

Premier 1 Netball - Awarded in recognition of the team's members’ outstanding reliability and commitment to the team and their determination to give a 110% effort in every game.  Consequently this team’s performance in the West Auckland Competition was exceptional, finishing runners-up in the top grade.  They went on to finish 6th in the B grade at the Upper North Island Secondary Schools tournament where the top teams from 100 schools competed.

Acelin has been awarded a Lynfield College Sports Scholarship in recognition of his contribution and commitment to sports teams, leadership in sport and his academic studies.  He plans to use this to help pursue his passion when he begins tertiary study in Sport and Recreation next year.

Yash has been awarded a Lynfield College Arts and Cultural scholarship in recognition of his public speaking skills and his overall success in his academic studies.  He will use it to go towards his university of Auckland fees.  He plans to study a Bachelor of Engineering and continue his interest in public speaking.


Billy has been awarded a Lynfield College Arts and Cultural scholarship in recognition of his contribution to the performing arts, his leadership and his overall success in his academic studies.  He plans to use the scholarship to help fund his tertiary study in media or music.

As usual, this was fiercely fought for across 6 different competitions.  With points allocated for both participation and placings, the overall House winner is rarely predictable!  This year is no exception, and finally emerging as the overall champion House for 2012 is Faumuima.

Lynfield students have excelled at all levels with several Excellence Plaques for Outstanding Performance being presented.

In reading the results below, be aware that High Distinction is for the top 10% of students in the country, with a select few at the very top being identified with Excellence for outstanding performance. Distinction is given to the next 15% of students.

Congratulations! to all of the following students:

The German department is pleased to announce that this year twelve Lynfield College students have been invited to the official Goethe Society prizegiving ceremony at the University of Auckland to receive their awards and prizes for the 2012 Goethe Examinations. These which require students to demonstrate their listening, reading, writing and speaking skills. Ellie Davies (Year 11) and Mallory Heslop (Year 12) each came 2nd in their division while Demi Cox (Year 13) won the 3rd prize overall.

Special skills at a young age have recently been recognised and rewarded at the Auckland Football Federation Referee Awards night on Saturday 13th October.

Aiden Moffat is the youngest Auckland Football referee and received the Highway Electrical Trophy for the Most Professional Youth Referee and the Countrywide Bank Cup as the Most Improved Assistant Referee.

You can see the write up on the Auckland Football webpage http://www.aucklandfootball.org.nz/index.php?id=44&tx_ttnews[tt_news]=1871&tx_ttnews[backPid]=43&cHash=336994fe5e


Aiden was away in Napier last weekend refereeing an under 19 tournament and starts his appointment to the ASB National Women’s Youth League this next coming weekend.

Jay Janarthanan and Tim Hight of Year 12 are obviously delighted with their recent success in the New Zealand Economics Quiz organised by the University of Auckland.

Both students scored High Distinction and and are pictured receiving their certificates at the University of Auckland.

14 other senior students received awards at both Credit and Distinction levels.

Our students and accompanying staff have so much to talk about on their return from Shinagawa (Tokyo). Their experiences with their host families, sightseeing, cultural and historical visits, shopping, eating...the stories and photos indicate this was a trip that will be unforgettable.

A visit to   http://www.lcshinagawa2012.blogspot.co.nz/  will give you diary entries, images and video as posted by the students during their trip.